In the pivotal poem “Marking Time,” which appears almost exactly halfway through Peter Filkins’s fourth collection of poetry, the speaker reflects on the death of a sibling and how time is marked by our memories. These memories, these moments– whether spent contemplating a painting  by Verneer or the simple toss of a bean bag– ultimately shape who we are. “Yet you are with me here, with me here again / where neither that moon nor your exist, but live / tethered to this memory composed of words.”

These are poems unafraid to be graceful and engaging. They attain an assurance and stability rare in contemporary poetry, while their careful balance of sadness and joy reminds the reader of the difficult negotiations we make in life.

“A deeply moving collection. Filkins traces out the rhythms of loss and renewal, of childhood and adulthood, in a blank verse so skillfully worked it seems effortless. Very few poets today write with such power and assurance.”
– John Koethe

“As one who hailed Peter Filkins’s stunning first book, I am happy to say that its great promise has been realized with The View We’re Granted.”
– Richard Wilbur

“His subtle art touches the pulse of both sorrow and praise.”
– Rosanna Warren

“Peter Filkins manages to use form to lure the colloquial towards song, as well as to invest moments of song with an awareness of the perils and possibilities of our everyday world. It’s a tension that is revelatory, and one that claims, at the end, the power of poetry to survive, and to help us.”
–Lawrence Raab

“Peter Filkins’ beautifully articulated, reticulated poems are filled with questions, and the questions they’re filled with are the unanswerable ones. Their distinction and power lie in their ability to make us ask those questions, too, as if for the first time.”
–Vijay Seshadri

“Of Peter Filkins’s first book, What She Knew, Richard Wilbur noted the subtle blending of “concrete description and the flow of memory and idea.” This blending and flow, the way the world contains an idea and an idea returns us to the world, are important strategies in these poems as they move from the historical to the personal, from the elegiac to the celebratory.”
– Lawrence Raab

“By turns discursive, dramatic, and lyrical, Augustine’s Vision presents a startlingly good poet who courageously interrogates ideas of evil, sin, and death while celebrating the goodness of creation, including both nature and the creations of humankind. Indeed, many of the poems are inspired responses to other artists: Vermeer, Monet, Wilfred Owen, Polanski’s Chinatown. The poet’s own work bids fair to inspire others, as beautiful phrases such as “flowers / afloat on the air” or “a stillness loud with geese” float to the surface of the page. In particular, his poem “Waterlilies,” consisting of a single sentence that runs for twenty-one lies, is a marvelous summation of the contrary elements that art makes cohere. You won’t want to miss this ambitious collection that possesses poise, grace, and intellectual fearlessness.”
– Kelly Cherry 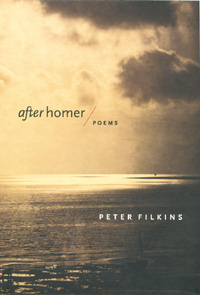 Written in a voice both direct and timely, Peter Filkins’ second book of poems speaks to our present historical moment and its place within the passage of time. Intimately personal and political, the poems remain anchored in a formal complexity that delivery clarity and nuance to the ideas set forth within them. Whether writing on the sinking of the Lusitania, the death of Chekhov, or his father’s passing, Filkins reminds us that, no matter the loss, “poetry will survive,” helped by the studied meditation he brings to it.

More than a book of poems, After Homer is the record of a mind trying to grapple with the suffering and outrage of history in a time when “terror’s partisan love / trades in wreckage like futures” (“Elegy for Joseph Brodsky”), forcing each of us to search “for another metaphor to live by” (“The Fly”). Whether echoing the Persian Gulf War while evoking “the little crucifixion of a missile’s sights” (“Dominion”), or writing about “The Venus of Willendorf,” a carved figurine dating from 30,000 to 20,000 B.C., Filkins underscores the Homeric notion that there is “nothing sadder than man,” though arguing nonetheless that “Love is the answer we give back” (“In Weather”), no matter the trials we face.

After Homer displays a breadth and variety that few books achieve. Even more impressive is the skill and subtlety with which Filkins weaves together such disparate material, his wide range of formal approaches allowing him to move from the secular to the sublime, between outrage and compassion, from love to loss with the turn of a page.

“I read After Homer with intense pleasure. Filkins is a marvelous poet… He hunts and finds essential metaphors in abundance in this mature and richly various book… After Homer is among the finest collections I’ve encountered in recent years– a distinguished volume by an important voice in American poetry.”
– Jay Parini

“The pleasures of this wide-ranging collection are substantial and surprising… Filkins has all the moves, and his formal mastery… [is] put to fine use as he ranges through time and place with intelligence, wit, and compassion.”
– Joan Murray

“Peter Filkins is a remarkably accomplished poet whose powers continue to grow and surprise. After Homer is proof of his psychological insight, lyrical gifts, and ability to move the reader.”
– Louis Begley

“There are breathtaking phrases in this fine collection, as when a flock of symbolic geese rise from earth in “a garland of distress that honks and shudders,” or falling snow is seen as “an intricate message / about the reticence of winter.” But in general Peter Filkins’s work avoids bravura; it has a quieter virtuosity which makes the total evocation of a Brueghel look easy (“Driving the Cattle Home”), conveys sensory experience with an arresting rightness (“The Film,” “The Fever”), and subtly blends, in many a poem, concrete description and the flow of memory and idea. A little poem like “Christmas at the Airport” asks an answering subtlety of the reader, if its full point and poignancy are to be grasped. What She Knew– which is further distinguished in the unusual variety of its forms and modes– is an admirable first book.”
– Richard Wilbur

“One of the many pleasures of What She Knew is its consistency of tone (rare, I think, in a first collection), the way the poems add up to create a singular sensibility: a man who is humane but wary, alert to the deceptions of our world, yet drawn to praise, to celebrate renewal when renewal means “something that we make, then remake once again.” This is the awareness and action of these poems– how it becomes possible for us to see the world and return “a little more amazed.” Peter Filkins’s skillful and illuminating poems help us approach that condition.”
–Lawrence Raab